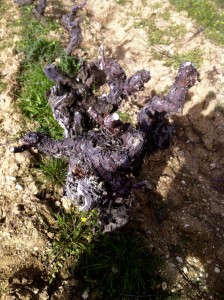 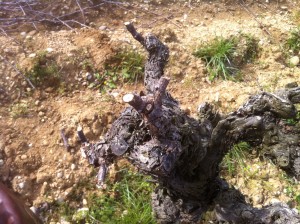 I’ve bought a new thermos flask. I cant imagine what went wrong with the last one- I thought the modern ones lasted a lifetime -but it stopped delivering insulation.
I am sitting on the bank by a plot of Thierry Forestier’s 100 year old Aramon , having a hot cuppa looking out to the Pic St Loup and the Cevennes beyond.
Aramon was widely planted in the late 19C and early 20C in the Languedoc for its massive crop of fruit. The Languedoc sent huge quantities of wine up to the troops in the first war so the sun of the glorious south could warm   and give courage to its sons  in the trenches .
100 years on Theirry makes a red wine called ” Anatheme” with Aramon. He says the vines are like ancient monuments they need a lot of looking after . He would get a grant from the chambre d’agriculture  to pull them up and plant Syrah clones .
The fruit these vines produce now is greatly reduced in quantity but unique and delicious in quality. “Anatheme” has an exotic citrus / sherbert/ cranberry /note on the nose- it send me rushing to sniff sumac, juniper, cloves. The palate is rich cherry flavoured but with lip smacking acidity . The great thing is that at 12% its a slip of wine to enjoy with a clear head , friends and the knowledge that the morning after will be sweet – as long as no other shit happens .