Finally i found there was something i could contribute for my youngest sons class in CM2 at Ecole- without too much french – a mud session on Lascaux !
The facilities are poor compared to London schools – there are no Art or music rooms they have to use the playground or the canteen to do any sort of Art project and i dont think they do much in the way of creative play at all. So i decided to let them all ( 30 ) have a go with prehistoric implements …. i tied charcoal to sticks, took in card board, made stencils and bought clay and paint. We made the work in the playground whilst the other younger kids were having their break – the noise was deafening…. It was interesting to see how they played – pretty rough, lots of shouting from the staff that was completely ignored by the children, very lord of the flies.
The kids were amazing though – their concentration was great – they sat and made their work independently or worked in groups – and the results speak for themselves. I did have one moment where they began to put their hands in the paint and slap each other on the back but apart form that they were fine. It felt great to see them enjoy just making not thinking of the end result. One kid even knew a poem about Lascaux ! 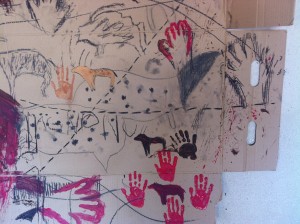 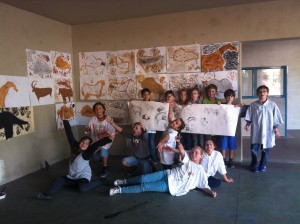