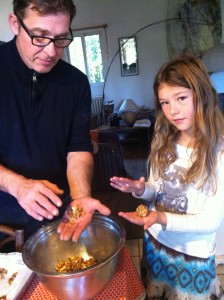 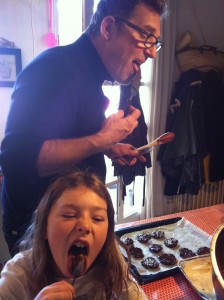 45g butter
60g demerara sugar
60g candied peel, chopped
45g dried cranberries or sour cherries, roughly chopped
45g soft dried figs, roughly chopped
20g pistachio kernels, roughly chopped
60g blanched almonds, cut into slivers
15g plain flour
Pinch of salt
1 tbsp double cream
200g dark chocolate, broken into pieces
Heat the oven to 180C/350F/gas mark four and line two baking trays with lightly greased parchment paper.
Melt the butter and sugar together in a pan over a medium heat until combined. Put the fruit and nuts in a bowl, sift over the flour and toss together until the flour is evenly distributed.
Take the pan off the heat and stir in the salt and cream, then stir into the fruit and nuts. Dollop rounded teaspoons of the mixture on to the baking trays and flatten out as much as possible without leaving holes, making sure they are well spaced out on the trays.
Bake for about 10-12 minutes until golden brown all over, then leave to cool on the tray.
When cool, melt half the chocolate in a heatproof bowl set over a pan of simmering water, making sure it doesn’t touch the water. Stir occasionally until liquid.
Carefully dip the underside of each florentine in the chocolate and leave to cool and set, then repeat. If you want to be really authentic, you can use a fork to make a wavy pattern in the setting chocolate at this point. Leave to harden completely before serving or storing in an air-tight box.
This recipe is from felicity Cloak/ The guardian